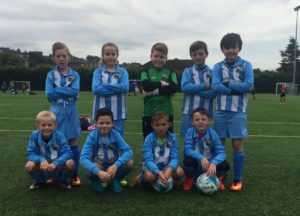 Warrenpoint Town Under 10’s 2016 before kick off against Windmill

Under 10
The under 10s played Lurgan Town for the 2nd time in a month and with the previous game being very close another tight game was expected. On this occasion however the Point tried everything to break down the Lurgan defence but just couldn’t create the goal scoring opportunities that their build up play deserved. Tiernan Palmer, who was outstanding in everything he did, from tackles to passing and pure determination to get the team moving forward along with Sofie Keenan who scored a well taken and rightly deserved goal, were the stand out players on the day. Jack Curran and Ryan Cunningham also put in impressive displays playing in new positions meaning there’s a bright future ahead for this young Point side.

Under 12
An early start for Warrenpoint Town U12’s with a 9am kick off against Belfast side Willowbank FC. A headed goal in the first two minutes from Ethan Sousa and a dominant display of one and two touch football led to the lead being extended before the half time break. Further goals from Stephen Reid, Ben Lappin, Aaran Downey, Ryan Clarke and a first league goal for Finian McCann put Warrenpoint in a lead that they always looked capable of extending. A great team performance from every player and a comprehensive victory sees the U12’s into the next round.

U12 Colts
The Colts played Camlough B on Friday night at the Abbey School and won their first match through teamwork, passing and determination. The first goal came from Donagh Murdoch operating as a wing back and his persistence led to a deserved goal. The team lined up with a 4 man defence of Roman Meddlicott, Joe McCloughlin, Evan Doyle and Donagh. Their strength was the key to win and allowed the team to push forward. A few players scored for the first time for club, well done to Jack Pollard and Kieron Casey. Hat trick for Callum Giles who is top scorer this season, Charlie O’Hare man of the match performance with 2 goals, well done lads.

Under 16s
The under 16s drew 0-0 with Oxford United in what feels like a loss. The lads deserved to pick up all three points hitting the post on three occasions and missing two one on ones, unfortunately it just wasn’t other day.