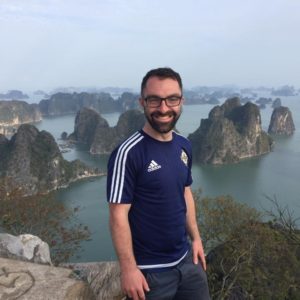 Andy, firstly welcome to Warrenpoint Town FC! How have you settled into the club?

The first few months have been brilliant, thanks.

The Summer Camps were amazing and they gave me a good opportunity to meet a lot of the younger players who were involved in the club already. From what I’ve seen there is a lot of talent coming through, but talent will not come through without hard work.

As well as this, we were able to attract some new players, who have been welcomed into their teams with open arms. We have also started a brand new girls team which I am extremely excited for! We’re always on the lookout for more, so don’t be scared to get in touch.

How important is sport, especially football, for children to get involved in?

Sport is becoming more and more important in today’s society. I hate sounding like an old man, but when we were kids sport and activities were taken for granted. We were always on the street playing football, making up our own games and learning ourselves…without adult supervision.

I have travelled across the country to coach in many schools and it is scary how many youngsters cannot jump, hop, catch etc. All basic movements that we learned on the streets growing up, things that we take for granted.

Then when kids come home from school, there is far too much screen time, kids don’t even have the chance to make up their own games, they just buy them online.

Add to this the fact that our government is at a standstill and one of the first things they cut was the funding for the IFA and GAA school sports. After schools sports programmes, like what we are trying to do here at Warrenpoint, are becoming more and more important by the day, and the younger the kids get involved, the better.

The summer camps were a hit over the school break! What kinds of activities did the kids take part in and what can they look forward to in the future?

I have done summer camps all over the world and I have to say this was up there with the best of them. It’s the kids who make these camps run well, and they really bought into all the games. They had plenty of contact time with the ball to improve their skills and we finished both camps with a World Cup or Champions League day, giving them loads of matches, which is all they want to do!

It helps that we had the music blasting which picks up the mood, and again, it couldn’t have been done  without a couple of the lads from our older teams helping out.

This is something we are aiming for, lifelong learners of the game, and in the future we hope to provide these lads with opportunities to go through their badges and coach some of the youth teams.

How important are the parents roles in the development of our youth teams?

I have seen far too many negative parents on my travels, but luckily here at Warrenpoint it has all been positive so far.

How is the future first team talent shaping up through the youth ranks?

The future looks bright for Warrenpoint. There is so much talent in the youth setup, but talent can only get you so far, the players still need to work hard at their game to get anywhere near the first team.

We’ve had a few individual players who travelled to France for a tournament with the County Down Select Squad and a number of others who are involved in the fantastic Club NI programme.

We have been able to push some of our u15s into the u16 team as they have been performing so well. Our aim is to get as many players through the youth ranks and into the first team as soon as we can and being able to start at a younger age makes it easier when the time comes.

Our U12s have just finished a fantastic Foyle Cup and our U14s came out of the Super Cup being praised for their style of football. These are brilliant experiences for the players and are essential for anyone wishing to make it as a first team player. 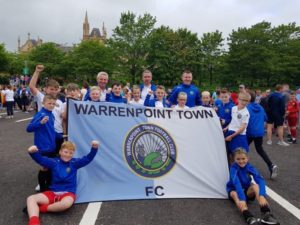 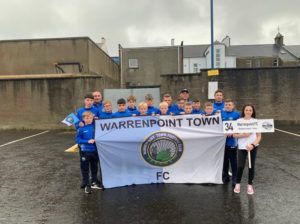 The u13s have an exciting season ahead having won a couple of pre season tournaments. They are moving onto 11v11 for the first time and are fundraising for Easter 2020 when they are travelling to Barcelona for a tournament. 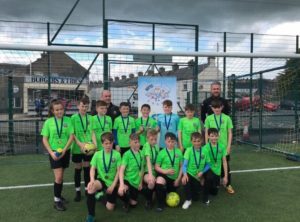 Through to the younger age groups, the U11s have been accepted into the very competitive Lisburn League. They have just come off the back of winning a DBS Sports Shield in Dublin. 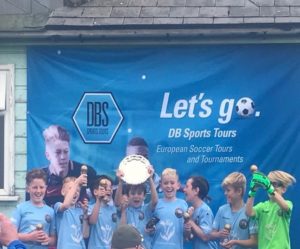 The U10s won the Craigavon Cup at a canter so we’ll be looking to push them onto bigger and better things for the future to keep them on their toes. They will enter the ABC league this year which will see them face some tough teams. 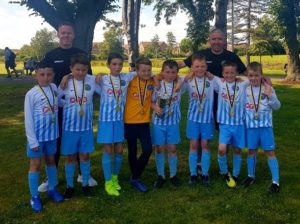 The U9s have a very big and exciting squad and I’m delighted to announce that they are in a position to field 2 teams in the Newry GDC. We’ll be looking to push them into a more competitive ABC League come January.

The U8s have only started this year, but having been to 2 tournaments already, it is clear to see that they love the game and will improve by the week. We are in a great position where we can enter 2 teams into the Newry GDC 5 a side league. 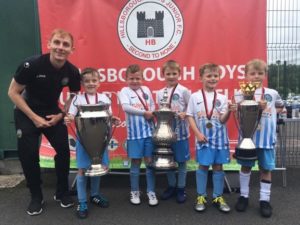 As for the girls, we have a number of players born between the years of 2008-2012. This is a brand new project for Warrenpoint and I hope that by this time next year we’ll have a lot more girls in the club.  Sessions take place from 5-6pm on Tuesday and Thursdays. Please do not hesitate to contact if you want to join. 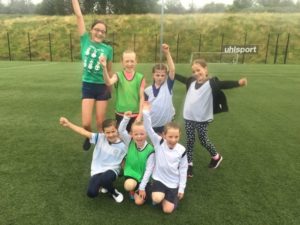