As the season comes to an end, captain Simon Kelly and manager Stephen McDonnell give us a few words.

‘Overall,  I think it has been a good season for us. To be safe from relegation with 7 games to play and especially after the tough start we had losing our first 6 games is a credit to the players and the staff.

‘Also reaching the cup semi final although it didn’t end how we would have liked was also a great achievement. So all in all I think people would agree it’s been a good season for us and everyone will be looking forward to their holidays before coming back and doing it all over again.’ 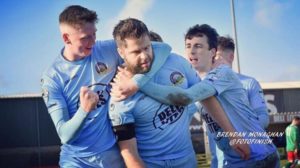 ‘As the season comes to an end, i would like to thank all the volunteers, board members, Fans and most importantly the players for their efforts over the campaign.

‘This season has seen us make huge strides and establish ourselves as Premiership club once again.

‘Thanks for your support Stephen.’ 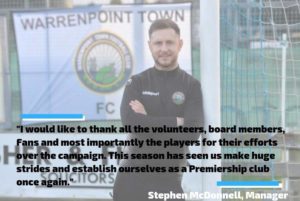