We recently caught up with former Point player Liam Bagnall for a few words ahead of our clash with Cliftonville;

He stated “It’ll be strange facing a lot of old team-mates but I’ve a job to do for Cliftonville now and I’ll be going into the game focusing on that.”

“I Really enjoyed my time at the point. Haven’t a bad word to say about the club or the people behind the scenes. We punched above our weight for years and I was delighted to leave the club on a positive note after achieving promotion.”

“The style of plays similar maybe a wee bit more possession based at Cliftonville but the principals are the same.”

“The point have plenty of quality throughout their team and they’ve added players with premier league experience so we’ll have to be at it to get the result we’re looking. 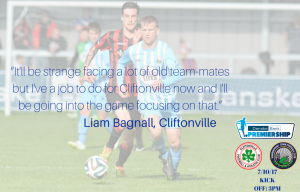