The NI Football League is delighted to launch the new Premiership Academy League starting this season!

The Academy League will see the introduction of two new development leagues for Under 16 and Under 18 teams to improve the pathway to the existing Under 20 Premiership Development League ahead of the 2018/2019 season.

The Academy League will kick-off on Sunday 2 September with a special ‘Development Day’ with the league schedule starting for the Under 16 and Under 18 teams the following weekend. The Under 20 league will continue to mirror the fixtures of the senior Danske Bank Premiership schedule.

“The Academy League aims to enhance this further by improving the pathway for talented young players and give them the best opportunity to develop into senior players within the NI Football League.”

Over the next few years the Academy League aims to create an environment that encourages youth development in Premiership clubs through improved support and meaningful partnerships.

Some of the aspects of this evolution of youth football in Northern Ireland include;

– A scholarship programme that combines formal education and additional training

– Ability for players to play up and down age bands

– The development of recognised Academy criteria in a Northern Ireland context

Sponsorship and partnership opportunities are still available for interested partners who want be part of youth football pathway, by contacting Steven Mills (smills@nifootballleague.com). 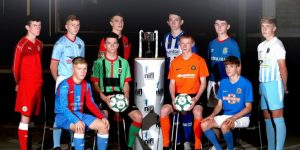