Three second half goals from Alan O’Sullivan and Cillian Duffy and saw Ireland come from behind against the ten men of South Korea to take all three points in their open Group A fixture at the World University Games in Naples.

Ireland had been knocked back by an early goal for South Korea after a slip by central defender Rob Slevin gave Jinhyun Kim the chance to beat David Coffey from inside the box on six minutes.

South Korea were reduced to ten men coming up to the break when Lee Kunhee was despatched for striking Maurice Nugent.

A much improved Ireland side dominated the second half and shortly after skipper Alan O’Sullivan had missed an open goal Cillian Duffy headed the equaliser on the hour from Sean Trimble’s right wing cross.

Minutes later O’Sullivan converted the first of his two spot kicks after he had been taken down in the box.

South Korea had lost their discipline at this stage and the third Ireland goal arrived with ten minutes remaining with O’Sullivan again on target after he had been fouled again.

Ho Kim did pull a goal back for South Korea near the end but the Irish managed to hang on for a welcome win.

Ireland will now face Uruguay on Sunday in the second group game with the top two finishers in the three team group going into the quarter finals. 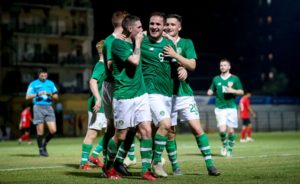 O’Sullivan celebrates one of his two goals

A fine individual effort from skipper Alan O’Sullivan on 20 minutes proved enough for Ireland to claim a 1-1 draw with Uruguay and take them into the quarter finals of the World University Games at Naples as group winners.

O’Sullivan’s two spot kicks against South Korea in their previous group game had helped Ireland to a 3-2 win and the Warrenpoint Town striker now studying at IT Carlow struck again to give Ireland an early lead gliding past a couple of Uruguay defenders to delicately steer the ball home.

Although O’Sullivan’s goal was quickly cancelled out when Pallares pulled one back for the South American’s seven minutes later, Ireland who only required the draw to progress, looked in no danger of missing out on taking their place in the last eight. where they will face Russian on Tuesday evening.

Ireland might have gained their second win in the group as Cillian Duffy struck the post with a fierce drive and later Sean McSweeney and Anthony McAlavey were off target with efforts. While Joe Manley had a header saved in what was over all a very professional performance by this talented side.

Ireland will now face Russian on Tuesday evening in the quarter finals kick off 8.0 Irish. 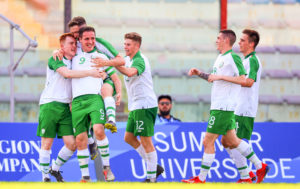