Warrenpoint town Under 18s travelled to Dungannons 3G on Friday 17th of November to take on League leaders Dungannon swifts .

It’s been a very mixed start to the league campaign for last year’s under 16s and they have missed the energy and influence of Aaron Pedan who has just recently returned from a four week suspension, and with Ethan Copes and Danny Magill starting to find great form again, things are beginning to improve for Kieran Power’s lads.

The Point boy’s started the brighter
Of the two teams and it was against the run of play that Dungannon took the lead when Eoghan Hawe slipped the ball under Matty Sherry to put the Swifts one up after 20 minutes. Warrenpoint had chances to equalise when Sean Mc Conville cut in from the left hand side and shot narrowly wide of the upright, soon after it was Danny Magill that unleashed a thunderbolt of a shot from 25 yards that was brilliantly tipped over the bar by Luke Mulholland the Dungannon keeper, however there wasn’t much he could do moments later when a long kick out from Matty sherry was headed onwards by Aaron Pedan and the on form Ethan Copes nipped inbetween the central defender’s and calmly lobbed the ball over the Keeper to level the scores at the interval.

After the break Dungannon improved and showed why their top of the league,following a splendid passage of play they found themselves 2-1 ahead when Fearghal Mc Garrity glided past the Point defenders and struck an unstoppable left foot shot past Matty Sherry.

Warrenpoint regrouped and started to impose themselves back into the game, Ethan Doyle was excellent in pocession,and alongside Ethan Power ,Matty Henning they were creating opportunities on the left hand side but the biggest threat was coming from the impressive Sean Mc Conville whose pace was causing problems for the Dungannon defence all night long. A neat pass from right back Tiernan Saul found the lively Mc Conville who beat his man and whipped in a tantalising cross from the right that was brilliantly headed home by Ethan Copes for his second of the night and levelled the scores once again. Warrenpoint introduced both Liam Mathers and Keelan Mc Parland to freshen things up in midfield and with the game evenly poised and time running out both teams pushed for the winner, but the Point defence Marshalled superbly by captain Danny Mc Evoy and Rory Craven limited Dungannon to long range shots that were easily dealt with by goal keeper Matty Sherry. With only moments remaining the impressive Sean Mc Conville gathered a pass from Mathers and his pace and power drove him goal bound and he curled the ball across the goal mouth that was deflected into the net to make the final score 3-2 to Warrenpoint in what was a fantastic game of football played by two teams that showed great willingness and sportsmanship, a credit to both sets of players. 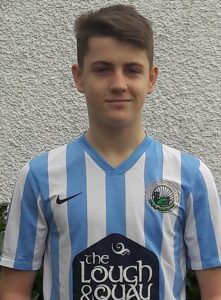 Man of the match was Sean Mc Conville who had one of his best games for the club.