Warrenpoint town under 18s bounced back from last week’s disappointing cup exit at the hands of league leaders Ballymena when they comfortably defeated Co Derry team Oxford United 5-0. This was in stark contrast to the first meeting between the two teams which resulted in a 5-2 defeat for the Warrenpoint lads.

The opening goal came within the first 10 minutes when Ethan Copes received a ball from Robbie Mc Ateer and he calmly lobbed John Conalon the United keeper to put the Point one up . A nice passage of play down the left hand side involving Ethan Power, Tieran Saul , and James Magowan resulted in fullback Power finding himself unmarked inside the Oxford penalty area and he slotted the ball into the bottom right hand corner of the goal for his second goal of the season. The following ten minutes definitely belonged to Oxford as the created a few chances of their own and for some stout defending from Aaron Pedan and captain Danny Mc Avoy which limited the Derry lads to a few long range shots, when they did eventually break into the box the referee awarded them a controversial penalty when forward Oran Hamill was seen to be apprehend by Ethan Power but Jack Mc Cleans penalty was superbly saved by Adam Mc Alpine . This was the turning point in the game for following Mc Alpines fantastic save it was soon 3 nil to the Point when a cross field pass from Aaron Kehoe found the unmarked Tiernan Saul and he made no mistake as he side footed the ball into the goal to make it three nil at the break.

The second half started with the Point boys playing Great football,and the very impressive James Magowan Played a defence splitting pass that found Sean Mc Conville on the edge of the Oxford box but his first time shot was well saved. Eoin Flyn making his first start since his move from Portadown was controlling the front line and causing the Oxford defence problems all night and it was Flynn who set up Saul for his second goal of game with a delicious pass, and the ex Windmill Star’s lad unleashed a ferocious left foot shot that flew pass the Oxford keeper to make it four nil, Andy Fox, Liam Mathers, and Ethan Doyle came on for the Point and all three were involved in the final goal when Fox found Tieran Saul and the Newry lad rounded of a great display when he scored to make it 5 -0 and scoring his first hattrick for the Point. A great performance from the lads and a well deserved Victory.

Man Of The Match was Hattrick Hero Tiernan Saul.

Next up for the U18s are Limavady in a double header, winner takes all league and cup game on Friday the 16th of February ..venue and ko time to be confirmed. 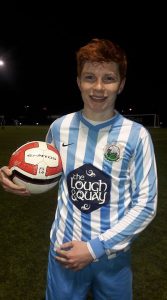