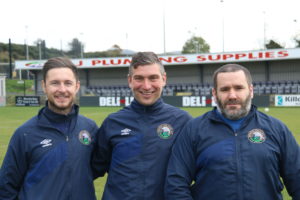 The managerial baton at Warrenpoint Town has been passed over to Matthew Tipton as Barry Gray ends his 10-year term at the helm.

Commenting Gray said, “I would like to thank everyone at the club, board, players and supporters for giving me the opportunity to be part of what we have built at Warrenpoint.

“The journey has been a long but enjoyable one and I look forward to exciting times ahead” added Gray.

The rise of Warrenpoint to senior football is still seen as a fairy tale by many but today with the appointment of former Welsh International professional footballer, Matthew Tipton, the club has demonstrated that it has no intention in going backwards.

Tipton has been at the club since July as Gray’s number 2 and has played a pivotal role in the club’s attempt at rebounding back to Premiership football within one season as they sit top of the Championship.

Former player Stephen McDonnell who re-joined the club during the summer as a coach has stepped up into the number two role alongside Tipton.
The board at Warrenpoint have wished the new managerial team the very best.

“Firstly we would like to thank Barry for all he has done for the club as manager and as a director. We all look forward to working even closer with him as we continue as a board with our big vision for the future.

“Matthew and Stephen have been around now for quite a few months and we have every faith they will take us on to the next level and we will be behind them fully in delivering the vision.

The focus at Warrenpoint will now turn to the Ballymena League Cup game this week as Matthew Tipton takes charge of his first game against his former manager and former club.