Today the Northern Ireland Football league have announced the fixtures for the forthcoming season. Warrenpoint Town will kick off the new season with an away trip to newly promoted and 2018/19 Championship winners, Larne FC on August 10.

The first home game of the campaign comes against Crusaders on Tuesday August 13.

McDonnell’s men will travel to take on Institute on Boxing day. The Point will start the new year (2020) by welcoming Crusaders to the Q Radio Arena at Milltown on 1st of January. 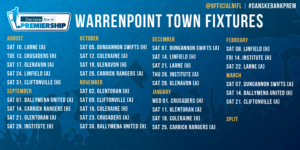